Difference between revisions of "Anarchism"

This is an article about a region. The name Anarchism has also other meanings.

This region embraces concepts of collectivism, democracy through communes, class war, revolution, communal responsibility and the overthrow of capitalism.

Anarchism is a political movement, not a lifestyle.

Although closed for many months, it has now reopened to new members.

The first UN delegate was Sacco & Vanzetti but appealed for members to remove endorsements as they considered it inappropriate for the founder to also be the UN delegate. Subsequently, Walter and Theodor became delegate but was later replaced by The People's Republic of Great Beer and Food, followed by DeCleyre and then the newcomer Eurasian Workers gained enough support to become delegate. 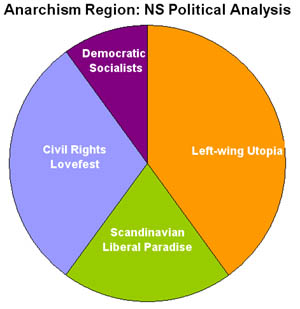