From NSwiki, the NationStates encyclopedia.
(Redirected from Eurasia (region))
Jump to: navigation, search

Above: the national flag of Eurasia. However, flags normally include a white disk in the middle, with a grenade inside the disk.

Founded in May 2005, Eurasia is a large region of around 70 countries (feb. 2006). It is currently under the join leadership of Marshals Cassi Hagen and Rickter Haskins. Eurasian Socialism is the official ideology of Eurasia, and is a unique combination of Social Futurism, an earlier form of Eurasian philosophy, and Marxism-Leninism.

Eurasia is a great region with a great history, a country of breathtaking beauty. High mountain chains are just one of the beauties of its fabulous landscape with green fields and sun-drenched beaches. Fabulous villages and endless cities scattered amongst snowy meadows. Historical monuments, forests, towering mountains... and a warm Eurasian welcome.

Head of government: Marshal Cassi Hagen (since May 2005);

17 (compulsory for four years, both sexes)

Varies between 5 to 20 military nations at any given time.

Beat the drums in a martial commotion! (PRE National Anthem)

1.If tomorrow brings war, If the foe should attack, If he suddenly strikes to surprise us; In defence of our land, Our free Eurasian land, The whole people as one will rise up.

Chorus: On the land, in the skies, on the ocean; Peals our song with a stern ringing might, If tomorrow brings war, Then tomorrow we march, So today let's be ready to fight!

2. If tomorrow brings war, The whole land from the cities Out to the fields will be ready. At the summons to fight, All the people will rise And shall ruthlessly rout the invader.

3. Planes in squadrons will soar, Our machine guns will fire, Mighty tanks will go rumbling and rattle. Fleets of warships will be sped, And our infantry march into battle.

4. We've a hatred for war, But our land we defend, So we strengthen defensive resources. Little blood will be shed, When on enemy soil, To the last we destroy hostile forces.

5. Rise ye People, arise, And assemble to march! Beat the drums in a martial commotion! Go Musicians, ahead! Chorus Leaders ahead! Sing our song with triumphant emotion!

6. The oppressed of the world Find our Socialist Land A great fortress, of strength in affliction. The Party's with us, And with iron, clenched hand The EAF shall lead us to vict'ry. 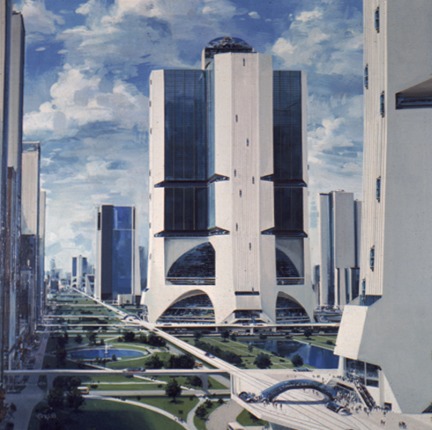 -above- Victory City, the capital of Eurasia.

Eurasia is a region of independent, sovereign republics with a common understanding of politics and economy. Eurasia was originally controlled by an eight republic oligarchy, which abandoned Eurasia in favour of an invasion of North Korea, which failed. Marshal Cassi Hagen of the national Bolshevik Republic of the Eurasian Front refounded Eurasia in May 2005, before the old republics had a chance to return. This action is called the May Revolution.

On August the 23rd of 2005, Marshal Hagen declared the foundation of the Eurasian Empire. The Empire was founded on the basis of National Futurism, an ideology upholding the Natural Law- that is, the law that in Nature, might is right. Combining this law with the vision of a united world governed by an Empire devoted to the total wellbeing of the people through technological advancement, and with the belief that differing ways of life, traditions, culture and heritage must be preserved against the forces of globalisation, Eurasia swiftly developed an ideology unique to the NS world.

The Empire steadily increased in power, conquering the Coalition of Free Nations in September, followed by the WRA and Deliverers of Justice in October. With many new leaders emerging, Hagen founded the National Futurist Worker's Party of Eurasia. General Rickter Haskins arose in this period as an outstanding military leader, making many new ideological contributions to the theory of National Futurism.

Rise to the World Stage

October 2005 was an eventful month. Eurasia allied with the neighbouring region The Evil Axis of Evil, and later that month, the allies worked together to topple the regime in True Evil. Eurasia allied itself with The Eurasian Republic, a socialist region. The Deliverers of Justice, Pax Britannica and the Commonwealth of Independent Regions declared war on Eurasia to avenge the damage made by the September invasion of the D.o.J.

The war with the Deliverers of Justice went well for Eurasia. Two attack waves were successfully fought back, and in the process, D.o.J. spies exposed themselves to Evil Axis of Evil intelligence officers, allowing Eurasia to undertake the First Great Purge, expelling many spies.

The attacks were not without a toll, however. Surrounded by spies and enemies, Eurasia was forced to look to new places for allies. With Eurasia's strong nationalist ideology and four Nazi republics present, Eurasia looked to the Aryan Army for support against the D.o.J.-PaxB.-C.I.S. triple alliance. The A.A. had many military victories to its name and at the time seemed a good place to start in building Eurasia's defence. Despite major ideological differences, a pact was signed with Aryanised Europe.

Along with the pact with Aryanised Europe, Communist provocation from the NationStates Communist Party forced Eurasia to a far-right position. On October the 25th, E.A.F. forces were repulsed by forces from the Marxist Maldov Pact, Red Liberty Alliance and Pacific Defenders, while attempting to annex the Eurasian Alliance, a dying region that Eurasia later annexed on the 31st of January, 2006. Eurasia declared war on the three of them. In the face of such overwhelming opposition, Eurasia began to look for new allies. The allies came in the form of the World Invaders Alliance.

Eurasian agents defended The Evil Axis of Evil (EAoE) against internal plotters on October 28, bringing the two regions closer. On the 29th, the Deliverers of Justice and Pax Britannica backed away from all-out war, suing for peace. The same day, Eurasia and The Eurasian Republic carried out a joint invasion against Albion, bringing the region under Republic rule (Albion eventually gained its independence, however). On Novermber 7, Eurasia defeated another coup in the EAoE and backed a new leader, Retalicus. Eurasia's ascent to the world stage was recognised as newspapers around the world began speculating of the possibility of Eurasia becoming a new major world super-power, and the mega-region Nationstates delivered military threats to Eurasia.

On December 10, Eurasia invaded and defeated the region Democracy. This was a symbolic victory and the beginnings of Eurasia's Left Turn. Recognising the military and political weakness of the extreme right-wing, and expanding on its policies of worker's control over the means of production, Eurasia took a further shift against capitalism, making a new addition to the National Futurist ideology, bringing it closer to socialism. Eurasia abandoned its alliance with Aryanised Europe in December. On December 18, Eurasia made its first strike against capitalism, when forces from New Oberon under the command of Eurasian general Helmut Dietrich von Czszeu conquered the 0000000 Republican Union.

On January the 14th, Eurasia was invaded by a socialist region, The Latin Nations, but after the Latino forces had been repulsed, it was discovered that the source of the invasion had been a misunderstanding on the part of Latino officials, who had taken a statement by Czszeu to be a military provocation. Eurasia and the Latin Nations entered a formal alliance, which became the first steps towards the formation of the Iron Curtain Pact.

Following the annexation of North Korea by the English monarchist Federal Commonwealth Society, Eurasia recognised the beginnings of a new right-wing offensive against the anti-capitalist regions of the world. Eurasia began to mobilise militarily to liberate North Korea, but were beaten to it by the USSR. The attack on North Korea convinced Eurasia that there is a need for a new military pact in order, and as such, Eurasia has begun building alliances with other regions also opposed to right-wing imperialism or under threat from similar attacks.

On the 8th of Febuary, Eurasian troops invaded Corporate Raiders, demanding that C.R. troops end the occupations of East Germany and the German Democratic Republic. On the 12th, the People's Republic of Cainia and the Socialist Federation merged into Eurasia, marking Eurasia's first significant steps to building Socialism as the Eurasian ideology. On the 13th of February, Eurasia annexed a Nazi region, Vinland, marking the very first invasion of a Nazi region in 2006. Communist Utopia joined the Socialist Federation in merging with Eurasia on the 14th, and was followed by the Alliance of Soviet Republics on the 19th. 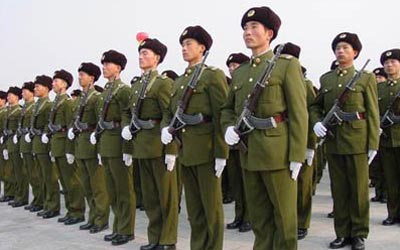 The Second Three Month Plan ended on the 24th. The next day, Marshal Hagen announced plans for the Third Three Month Plan to commence in March, the aim being to boost Party membership and increase membership to Eurasia. At about the same time, the Social Futurist Worker's Party voted to change its name to the Eurasian Worker's Party, and voted to accept Eurasian Socialism as the official ideology of Eurasia, replacing Social Futurism, which was incorporated into Eurasian Socialism. EWP numbers rose sharply thanks to the three merges into Eurasia. Eurasia reached seventy republics of the 26th of February.

On the 27th of February, Eurasian Worker's Party member Emily Green asked for Eurasian Armed Forces assistance in securing the East Asian Dominion, her country's first region, against imperialism. The E.A.D. had been under Raider Unity occupation for some time, and had been abandoned, leaving the 70 republic strong region in total anarchy. With the help of the EAF, Green became the EAD's leader on the 28th, and succesfully organised the military to repel an invasion by the Military Grounds. Green is proceeding to build a strong and independent region, with Eurasia's assistance.

We must defend our country!